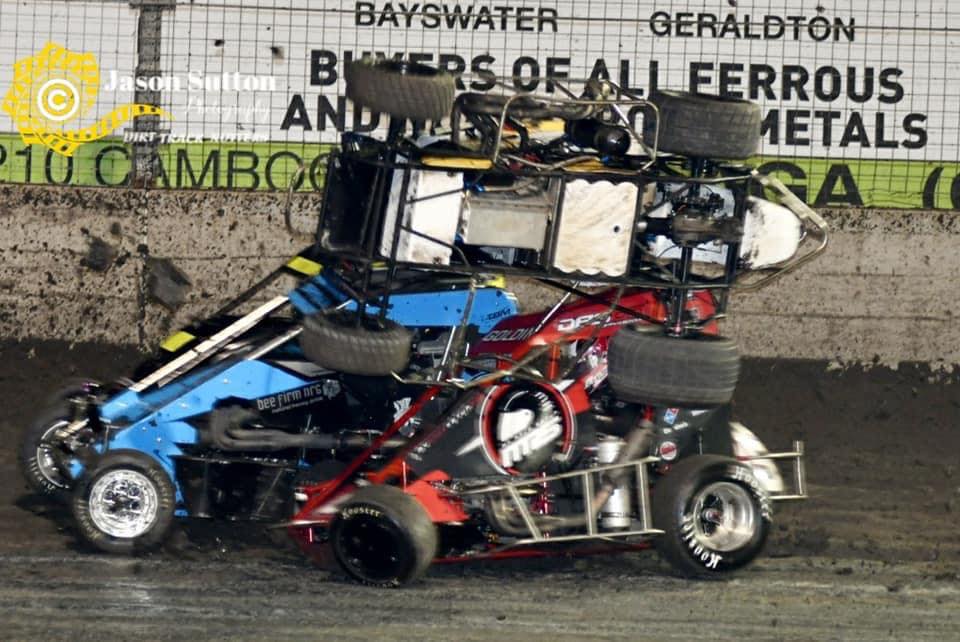 With confidence high after a podium finish in the opening event of the season and debuting a new paint scheme on Saturday, the team was quietly optimistic about their chances, but unfortunately things didn’t quite pan out the way they hoped.

“It was just one of those nights you’d rather forget I think” said Rob, reflecting after the show.

Rob was scheduled to start from position one in the first heat and then position nine in his second as he looked to gain points to start towards the pointy end of the all important thirty lap feature race.

“The first heat was a bit weird” says Rob. “The track was very different to the usual Motorplex that we’re used to: it was quite slick and dusty and pretty rough, we just missed the setup. We started on pole but ended up slipping down the order a bit. A few laps from the end I had one of the worst slide jobs done on me that I’ve had in a while. There was no way he was going to make the move, he hit my front, we got locked together and slowed down so much that the motor almost stalled. I kept it going, just, but because of that move I ended up finishing last.”

After a disappointing opening heat the team worked hard to tune the car ready for the second to see if they could make some ground up starting from the rear.

“We were going ok keeping up with the pack, but I just couldn’t move forward another car! Next I had someone in front of me have a half lose so again with nowhere to go the motor stalled and I finished last again.”

With two difficult heat races behind him, Rob and the team again got to work preparing the car for the feature where he would be starting out of position eleven in an eighteen strong field. Unfortunately it was a continuation of the rough night, with a car landing on Rob in turns one and two after just two laps, and Rob finishing the night on the infield.

“In the feature it was just a case of wrong place wrong time. Jolly had spun and I had already set the car into the turn, another car had moved to avoid Jolly and I think I’ve hit them with the front which broke one of the radius rods, bent the front shocks and we couldn’t continue. Hopefully that’s our bad one done for the year and we can get back on track shortly!”

Indeed, the night was unfortunate for the team, but as always they will knuckle down to get the car ready for the next show, which is another big one in the annual John Day Classic event.“

There is a bit of damage, laments Rob. “It’s pretty disheartening as its so early in the season but we’ll bounce back. We got out lightly compared to some other cars that night, that’s for sure. The shocks will be sent off to Shock Absorber Therapy soon to see what can be salvaged and some of the panels will need to go back to AG Composites, and we will go from there.”

With a big couple of weeks before the John Day Speedcar Classic on the 5th of December, back at the Perth Motorplex, Rob would really like to thank his sponsors whose support will help get him back on track: Quantum Collective, My Race Setup, Dasco Supply Group, QVEE, Thermal Dynamics Engine Heaters, Asteel Powdercoaters, AG Composites, Dominos Spearwood, Hyper Industries and Mills Drainage.