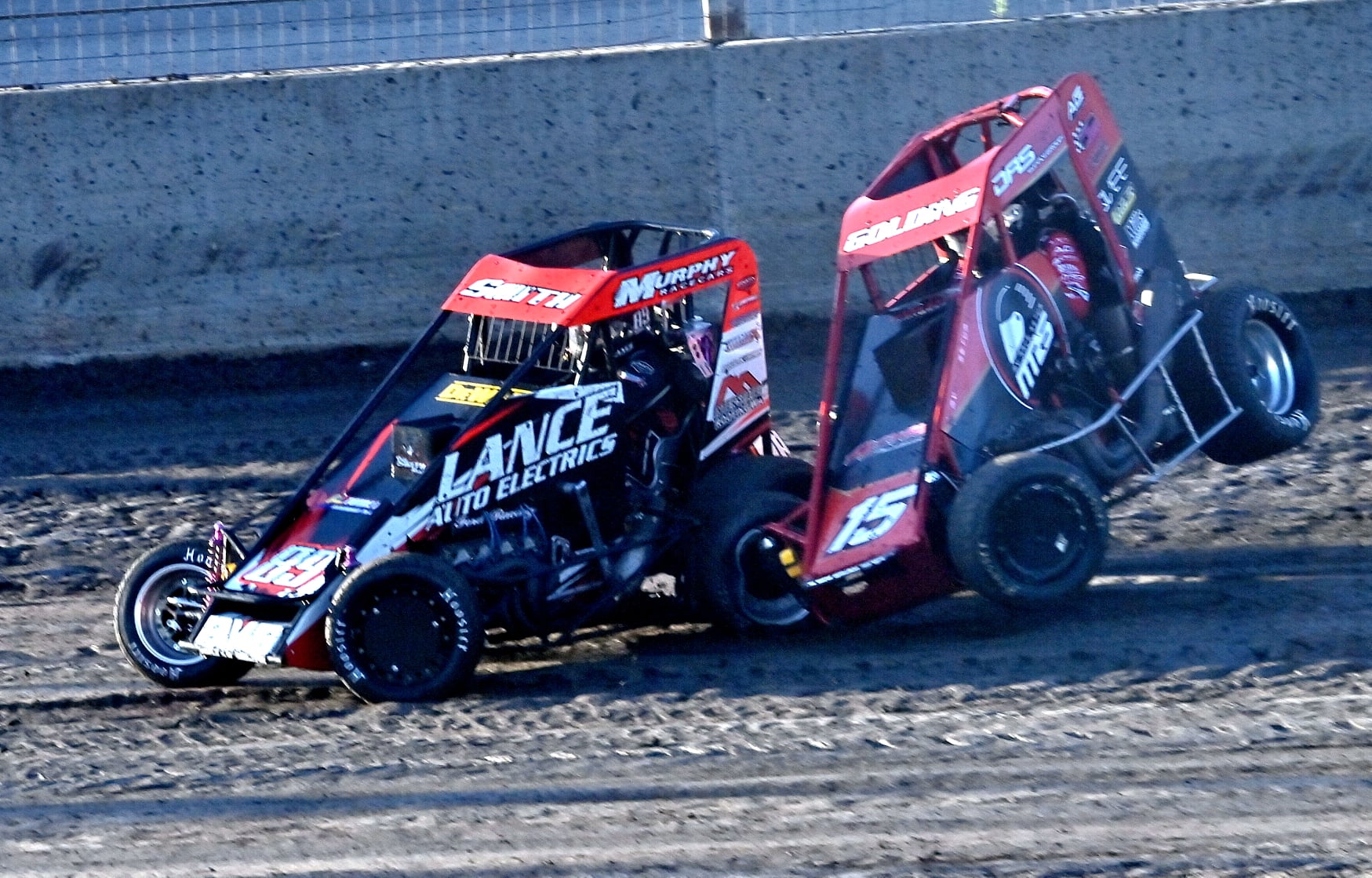 ALMOST OVER BEFORE IT BEGAN!

“We had a pretty damn tough night.”

That’s how Rob Golding sums up his night in the John Day Speedcar Classic at the Perth Motorplex last weekend after an early night crash almost put paid to his chances early on.

With Speedcars featuring heavily on the program, they would be contesting a format that saw them start with qualifying, then move onto two heat races per driver prior to the all important twenty five lap feature.

Unfortunately for Rob and the Golding Motorsport team, it all came undone early in the piece when another competitor spun, leaving Rob with nowhere to go and the once pristine #15 machine with plenty of damage as is graphically captured by legendary lensman Peter Roebuck below.

“We were quietly confident of a decent qualifying result,” says Rob. “It’s never been a strong suit of mine and the last couple have been big improvements, but I only got half a lap in! On my first timed lap, coming into turn four Cory spun. I was already committed to my line in the corner and I tried to avoid him but the track was a bit greasy and he rolled back up the track and left me with nowhere to go.”

This incident meant that not only did Rob not record a qualifying lap, which in turn saw him at a disadvantage for the heat races, but also left the team with plenty of work to do if they wanted to get even get back on track.

“The hit itself wasn’t too bad, laments Rob. “I thought it might have just been a front end, but when we got it back to the pits and started work we realised it did a heap of damage; the more we fixed the more we found. The angle that it hit on sent the radius rods right into the engine bay and hit the oil filter and radiator, puncturing both.”

Despite the damage, Rob and the team got to work, with the WASDA Community also banding together to help get Rob out on track despite the disheartening initial state of the car.

“I must say a massive thank you to everyone to helped,” says Rob. “Before I even walked back to the pits, my crew guys had the car up on stands….Les, Travis, Brandon and Matty, you guys are legends! There is no way without those guys we would have made it out for the feature. There were multiple times where I said to stop but they kept pushing and we made it out on track for the feature just as the gates closed.”

Indeed, Rob made it out on track with moments to spare, but after gathering no points in the qualifiers when he was unable to record a timed lap and then missing both his heats, Rob would be forced to line up dead last, from position nineteen.

Despite the lead into the main event, Rob would have a decent race, picking up positions as the laps wound down, moving into the top ten around lap eighteen, then picking up two more positions in the final laps to come home with a credible eighth place finish.

“The feature race was ok. Without having done any laps that night it was a bit of a trial and error with setup. It took me a few laps to figure out the track then we were able to move forward. I think if we had have started higher up, we could have had a top five finish.”

Of course, this result would not have been possible without help from a lot of people: not just Rob’s regular crew, but also plenty of people in the Speedcar pits.

“Another huge thanks goes to the people that lent me some gear to get back out. Graham Jones, Rod Bennett, Jody Crombie and my brother Dan, plus all the others who offered assistance, it is so greatly appreciated. You can tell how great the club is when people volunteer to help fix the car and offer parts without even asking. I had people from almost every team come up and offer help which was really cool.”

Now that the John Day Speedcar Classic is over, Rob and the team can now spend some time going over the car and ensuring it is back in top condition prior to the next meeting.

“We’re in the process of just assessing how much its going to cost,” Rob says. “At the moment its not looking pretty. We need to have a shock repaired, a new radiator, fix a heap of mounts inside the engine bay and replace broken components on the front right, including the wheel. Luckily we have a few more weeks to get everything right.”

The team is now working towards being ready for the annual Boxing Day Bonanza event at the Perth Motorplex and will be hoping for the tables to turn so they can get back to the form that saw them finish on the podium in the past.

“We really just need to get some luck back on our side. I keep saying it, but for the past twelve months of racing we just can’t catch a break. It will turn out though, it always does. Hopefully sooner rather than later! The budget cant take many more night like that one!”