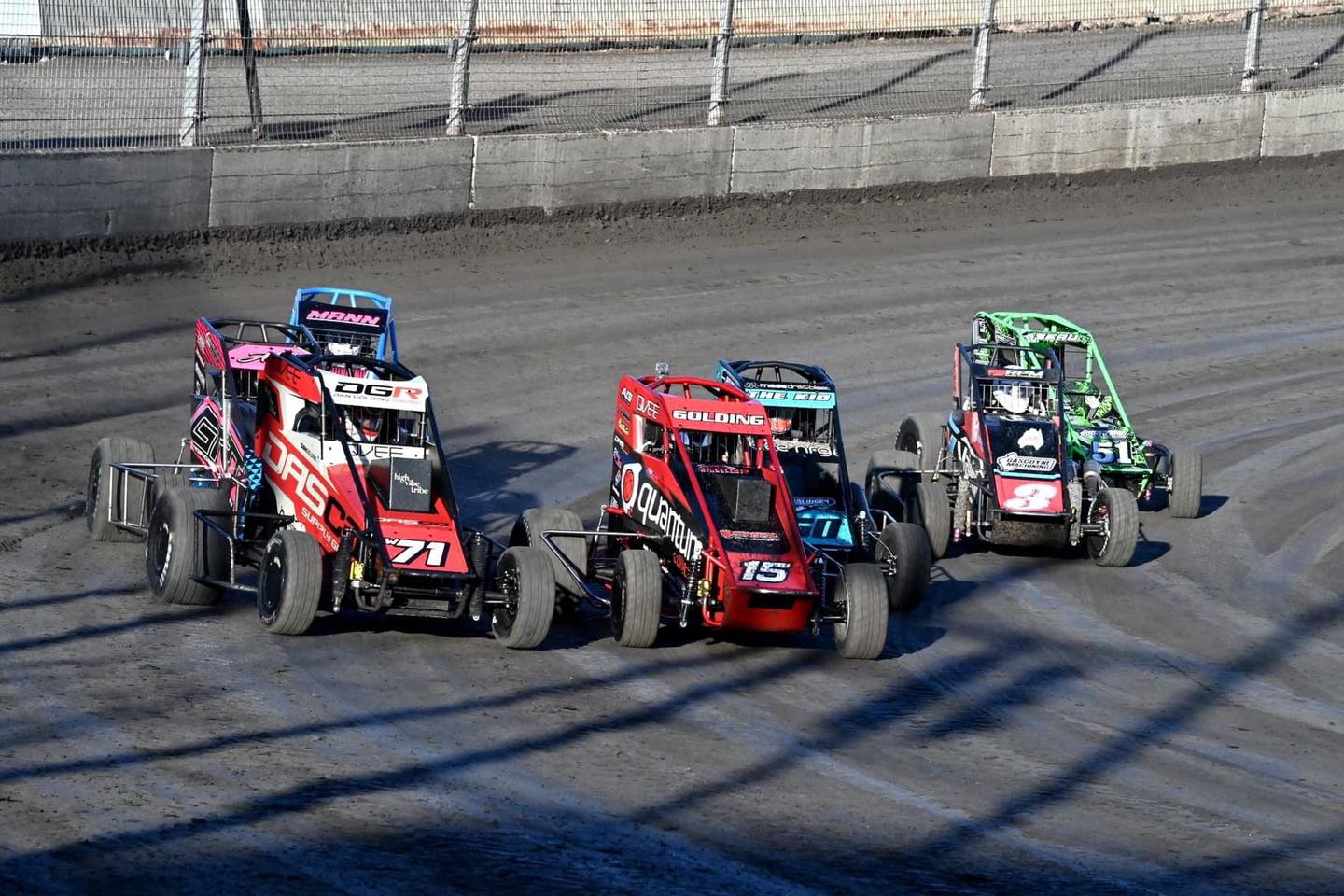 Those are the words of Golding Motorsport driver Rob Golding after the first two rounds of the Esslinger Engineering Speedcar Triple Crown, which may have been his last events for some time.

The team contested two meetings at the Perth Motorplex over the festive period, starting with the annual Boxing Day Bonanza event on the 26th of December and then followed up with the 50th Annual New Year Speedcar Derby on the 2nd of January to welcome in the New Year.

Rob would get two heat races prior to the feature race on Boxing Night. The first heat saw him start sixth and finish seventh, while his second heat was a third place start to a fourth place finish, enough to put Rob out of position seven for the feature. While a number of other competitors fell by the wayside throughout the feature, Rob concentrated on running his own race and was able to come home in sixth place.

“It was the same old story for us, we just can’t catch a break!’ laments Rob. “We had a bolt in the steering break which made the steering box move around a lot. Every time I tried to turn into the corner it would move around and hit my left leg. Not long after that the brakes started to go: I looked up at the board and there was 6 laps to go so I just rolled around, I had some brakes but just had to pump it so I wasn’t a danger to anyone.”

The team got together after the meeting to sort out the issues and they were done and ready for the meeting on the second.

It turned out that the bolt in the steering had actually snapped, while the brake issue was a failure in the dry brake coupler at the front.

“What really sucks is I felt we had a really good car in the feature’ says Rob. “We think we found something with the setup, but it just wasn’t to be again.”Back at the track for the New Year Derby and Rob was sitting sixth in the Triple Crown points coming into the show, with a format identical to that from Boxing Day.

Rob had it all ahead of him with a pole position start in the opening heat. “It’s been a long time since I have started there so I was a bit nervous,’ says Rob. “It was really hard to tell what the track was going to do so it was a bit of a shot in the dark with the shocks and as the track team put a huge amount of water on the track while we were waiting, I made some adjustments.”

“On the first start it was called back as three cars passed me before the greens even went on! The next start I got off the line really well and had a bit of a lead coming out of turn two but there was another restart.. it is good to hear that Lee is ok after the nasty meet with the wall!”

“We fell back a bit after missing the setup a little but we had some good car speed.”

Rob would come home with a fifth place finish in that race, and he was ready to go for the second heat where he would start from position eleven.

“For the second heat we were off the back and we had changed the car a bit to try to move forward. We got an ok jump, but the track was pretty fast so we were all a similar speed. With two laps to go in the race, I heard a bit of a bang then a weird sound as the car dropped a cylinder. I pulled it up pretty quick and headed infield.”

Rob would record a DNF in the second heat, the team getting the car back to the pits ready to make the repairs for the feature. Unfortunately, this didn’t go to plan.

“At first, I thought it did a crank trigger, so we got it back to the pits to check and did find that one had failed. We changed it and tried to start the car again, but the motor wouldn’t budge. We took it back to the pits, pulled the plugs and it showed an internal failure, so our night was done.”Indeed, Rob would be unable to start the feature, hurting both his Track Championship points and seeing him drop to tenth in the Triple Crown points. The main focus now though is to sort out the issues with the engine.“It’s hard to tell what the exact issues are without taking everything apart, but we know its not good….its definitely dropped a valve,” says Rob. “From what we could tell at the track the roller of the rocker looks to have broken which has upset the valve and dropped it into the cylinder. There is metal everywhere and I dare say at this stage we’d be done for the year, possibly longer.”

“As a low budget team, things like this always hurt. Its all part of motor racing but after the year we’ve had its another kick in the teeth, it’s a cruel sport sometimes.

”Despite the hard luck of the last season or so, Rob is still thankful to be involved with Speedcars and will do is best to get back out there whenever it is possible. “Luck just hasn’t been with us for a while now, all of the things that have failed are beyond our control. It’s just not meant to be at the moment. But, racing these cars has been my childhood dream so we will regroup and be back, hopefully we can pick up some new partners and be back sooner rather than later!”

Fingers crossed the Golding Motorsport #15 will be back on the track as quick as possible!