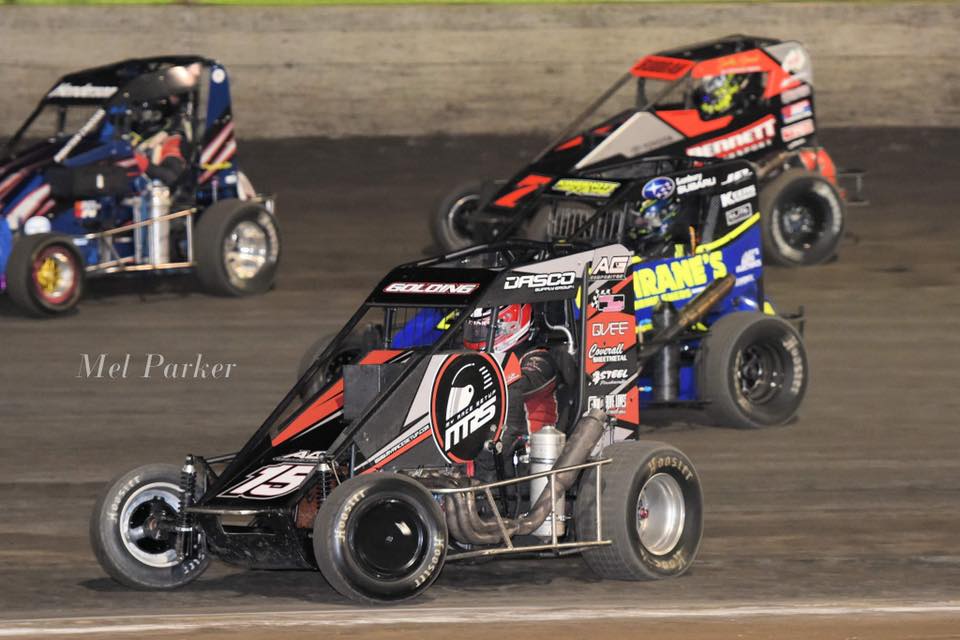 Rolling with the punches!

It has been a busy weekend for the Golding Motorsport team, competing at the Perth Motorplex on Saturday night in the City of Kwinana Cup.

“There were some pretty wild slide jobs happening!” said Rob upon reflection. “I was on the receiving end of one in the second heat that I thought was a bit late… I had to slam on the brakes which locked the wheels and almost stalled the motor as they kept drifting up, so it took all of my momentum, which in the end cost me around four positions and it was hard to recover after that.”

With the Motorplex trialling a new format based on seeding groups, Rob was slated to start the twenty lap feature race from position three, from which he had a decent start and was battling within the lead group of cars.

After running in second for the opening laps of the feature race, Rob was being pursued by a number of cars, including his brother Dan when the siblings made contact, leaving Rob to hit the wall heavily.

“We were simply racing for the same bit of track. Track conditions meant the grip was one line up at the wall and two cars don’t go into one: I was on the outside and I didn’t really have anywhere to go and ended up getting squeezed a bit and made contact with the wall. Its just a racing incident and unfortunately I came off second best.”

The contact with the wall was certainly significant, Rob losing a wheel cover on track but also doing some damage to the car, this left him no choice but to continue to circulate just to gain championship points.

“After the hit the car was a bit of a handful to drive so I just moved to the bottom and focused on finishing the race to get some points,” says Rob.

The team now has a big couple of weeks to get the car ready prior to the biggest Speedcar event of the season, the John Day Speedcar Classic on Saturday the 7th of December, where Rob will take on some of the best Speedcar racers in the World.

“Yeah, we have a bit of damage to sort out before then!” grimaces Rob. “We had to get the grinder out to cut away some parts before the car went back into the trailer. There’s a little bit of chassis damage where the Jacobs ladder mounts to the car, so it’ll have to go up to our friends at Hyper Industries to get looked at.”

Despite the tough start, Rob is still optimistic about what lays ahead and is looking forward to getting back on track.

“I know we’re only three events in but its been a tough start to the season. We will bring out a modified livery at the John Day Speedcar Classic so maybe that will change our luck!”

Stay tuned as we reveal the teams updated livery in the coming weeks and cover all the excitement in the lead up to the John Day Speedcar Classic!