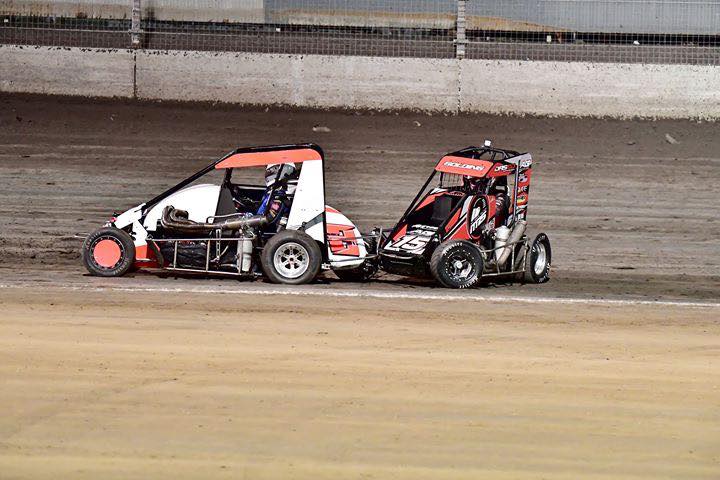 Golding Motorsport team driver Rob Golding competed last weekend at the Perth Motorplex but despite having some great car speed, the luck just wasn’t there!

Heat one would see Rob starting from position four, but ultimately he would come home with right place.

“In the first heat we were in for a good result and we had a great battle with Dan (Golding) for a couple of laps but towards the end when I was trying to make up some ground I hit a puddle on the track and the car just looped around. They warned us on the radio it had just been watered and the track looked good…I think it was the only puddle out there out there and I hit it!”

The second heat, the Indian File race, would see Robs best race of the night as started from position seven and he fought his way forward to finish in position three.

“The second heat was a lot better,” he says. “We started down the back and were moving forward. When the red lights came on I made some adjustments to the shocks and after the restart I think we gained four spots in a couple of laps to finish 3rd after starting at the rear!”

Courtesy of these results Rob would start from position six in the feature race. After being caught up in an incident though, Rob would manage to continue on and come home in sixth.

“In the feature we were good speed wise, but as has been the story all year, we were just in the wrong place at the wrong time! We were running in around 3rd or 4th and unfortunately for us Ross spun. I had nowhere to go so jammed on the brakes and spun to miss him. There was no damage to either car but it meant I had to start at the back. I was able to gain a few positions on the restart but a few laps later got drilled in the side of my car and lost some spots because of that and we never really recovered.”

Despite these results, Rob has continued to consistently finish and there is some reward as he now sits equal third in the Pool Shop Group Perth Motorplex Track Championship, just 31 points behind the leader. With a few rounds still remaining, the hope is still to defend his Track Championship from last season!

“We are still up there in points which is nice considering we haven’t strung a whole night together yet…we’ve had good heats and good features but not all in the one night. It’s a shame that all of the effort we are putting in isn’t showing yet, but it will pay off soon I hope!”

The next event for the team will be the WA Speedcar Title, back at the Perth Motorplex on the 14th of March and hopefully the event will give Rob the chance to really show what he is capable of and improve on his previous best finish in the event of 7th!